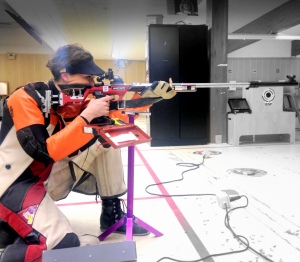 Yesterday, I shot for the first time since the beginning of the year when I was only able to shoot prone. It was a very emotional and comical.

The recovery process since this second back surgery has been steady, but not without a few ups and downs. As my body has become stronger and more fit for training some of my symptoms have come and gone which has been frustrating but nonetheless here we are! Kneeling was the first position of choice because it provides the most neutral position for my hips and lower back out of all of my positions. Next will be prone and then standing.

So in preparation for shooting, we have been working on the range of motion in the area where my back meets my hips as well as extension of the lower back. Because my movement has had to be so limited over the past year, we realized over the last month that I was hardly extending my back at all. Though shooters are often made fun of for looking like robots in their suits, I had began to look like one all the time… not just on the range or dance floor. Hehe. With many weeks of hard work under my belt, I was mostly very excited to be able to shoot my beloved rifles.

As I got into position, I have to admit that I put my sling on backwards… I know, I know… rookie mistake! and once I realized it gave me a very good chuckle! Thankful no one was on the range to witness it! My first few shots were a bit rough but I was still sighting in so let just say it was the sights. But after a few position adjustments, the pieces started to fall right in place and my hold steadied down quite a bit and I could begin to focus on shot execution. By the end of my first session back, I was able to shoot 3 tens in a row with great execution and I called them tens! Though this might seem as if it is a small milestone, for me being able to get into position was my goal for the training and so to be able to experience my muscle memory kicking in and performing was huge for me! After a year of not shooting kneeling and almost 9 months of not shooting at all, I am very happy! I am looking forward to training the next week a few times a bit longer and then the next week I get to shoot prone!